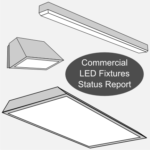 LED fixtures are not all the same. The range of efficiency available today is surprisingly wide.

We were talking recently to a colleague about lighting for his office, and he was shocked to learn that there were different options. He thought “just going LED” was sufficient. His is a widely-held misconception at this stage in the LED revolution. Today, when we hear someone proudly proclaim “we went LED”, our response is “uh-oh.”

It’s time for an updated LED fixture status report, to provide guidance on selecting lighting fixtures with the highest efficacies.

In commercial lighting, the starting point is DesignLights Consortium. DLC is a non-profit dedicated to accelerating the widespread adoption of high-performing commercial lighting solutions. Their qualified product list (QPL) is the best resource to check for many categories of fixtures.

There are two levels of efficiency on the QPL: standard & premium. “Standard” is the base level in fixture efficacy (lumens per watt); “premium” certification goes one step further (higher LPW). The differential between the two levels varies by category, but premium exceeds by at least 20LPW.

Just “going LED” might be not much more efficient than fluorescent. Going with DLC standard certified products is better, and going with premium is even better.

But why stop there? Even premium certification is a minimum threshold, and more savings could be had.

So, we are introducing “FDC Recommends.” This is the level that we here at Fred Davis Corporation suggest for minimum efficacy. The minimum LPW we’ve chosen is near the highest fixture efficacy currently available, but still has multiple products made by “reputable” manufacturers.

“Reputable” means a manufacturer: with deep enough experience, with a known reputation for quality products, and whose industry standing reassures that warranty issues would be resolved.

DLC has proposed a revised technical standard (V5.0) that should be implemented in 2020. The second draft (released 9/30/19) will increase fixture efficacy an average of 10.8%. So, even when the floor rises next year, there will still be a large range upward.

Below we provide the current status in some common categories of commercial fixtures: troffer, linear, and wall-pack. The chart shows the minimum LPW in each category.

For the troffer, we focused on the 2’x4′ fixture, the recessed type most common in offices and we honed in on 4000k fixtures (the most common color temperature). Then we looked at three different lumen ranges: 3000-4000 (2-F32T8 equivalent), 4000-5000 (3-F32T8 equivalent), and 6800-7700 lumens (4-F32T8 equivalent ). Our 140 LPW recommendation holds for all three. Other troffer configurations, meaning different physical sizes, vary slightly in maximum efficacy available.

For linear fixtures, we looked at 4000k fixtures for both 1-lamp and 2-lamp fluorescent equivalencies. Speaking of equivalency, one should be cautious about size as the form factor of LED linear is typically smaller than 4” width x 4” depth. The length is the same typical 2′ or 4′, but those widths and depths are considerably smaller than most fluorescent fixtures they would replace.

With outdoor wall-packs, there are two DLC subcategories within Wall-Mounted Luminaries: “Outdoor Full-Cutoff ” and “Outdoor Non-Cutoff and Semi-Cutoff ”. We focused on full-cutoff and generally only recommend that category. The rationale: all light from a full-cutoff LED fixture should be illuminating the intended area. However, with non-cutoff and semi-cutoff types, some light will not be useful. That excess light can cause glare, or pollute the night sky. How much light goes in which direction is addressed by the BUG (backlight/uplight/glare) rating system. But with a simple LPW number, which counts all lumens out of the fixture, directionality is not considered. Bottom line: a full-cutoff LED should always need fewer watts to provide the illumination needed.

This leads to an important caveat for all lighting, indoors or out. No lighting product can be considered a proper solution if it does not meet all pertinent design considerations. These can be aesthetics, color, quality, cost, etc, but also photometry: light should be appropriately illuminating the target areas.

All the above covers just fixture efficacy (LPW) and not consider further savings that should be achieved with controls. That’s another article.

In just these three categories, we’re pointing out a differential of 40-44% in fixture efficacy.

This article is the first in our series describing the current status of LED lighting. Stay tuned for an upcoming status report on LED Residential fixtures. Click the “join the mailing list” link below so you don’t miss an article.